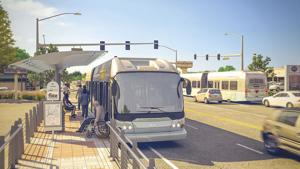 NINETEEN CLARK COUNTY citizens have sued C-TRAN, seeking to halt the Bus Rapid Transit (BRT) high capacity project planned for Fourth Plain Blvd. in Vancouver, an accounting of funds expended so far on the project, and a public vote approving BRT before further funds are spent.

Nineteen Clark County citizens have sued C-TRAN, seeking to halt the Bus Rapid Transit (BRT) high capacity project planned for Fourth Plain Blvd. in Vancouver, an accounting of funds expended so far on the project, and a public vote approving BRT before further funds are spent.

The lawsuit was filed in Clark County Superior Court on Nov. 24 by the Ball Janik law firm of Portland, on behalf of citizens described in the suit as C-TRAN taxpayers who live in the C-TRAN service area.

The suit alleges that new transit taxes approved by Clark County voters in 2005 and 2011 were for the preservation of existing C-TRAN service, not for the construction of new, high capacity transit projects. The suit recounts election documentation in support of that assertion.

The suit states that new taxes sought in 2012 for high capacity transit projects, including BRT, were turned down by voters.

The suit states that C-TRAN needs voter approval of BRT as a high capacity project, and that BRT is not part of the agency’s existing comprehensive plan, a 20-year Transit Development Plan.

The suit concludes that C-TRAN has acted outside its statutory authority in moving forward with the BRT project.

The suit alleges that C-TRAN is not authorized to receive federal funding for BRT or to continue expending its reserve funds on the project. The suit states that most of C-TRAN reserves came from tax revenues.

States the lawsuit, “In contravention of the HCT Act (a state law), C-TRAN has unilaterally determined it is authorized to finance and construct BRT without first receiving approval from the voters of Clark County.”

According to the lawsuit, C-TRAN’s current plan to finance the local match for BRT capital improvements is to use $6.1 million of C-TRAN reserve funds, most or all of which are sales and use tax revenue dedicated to preserving existing service, not BRT.

The suit asks the court to appoint an independent auditor to determine the extent of C-TRAN’s alleged unauthorized expenditures.

The lawsuit states that “accounts maintained by C-TRAN are particularly complex, and the sales and use tax revenue improperly expended by C-TRAN was supposed to be held in dedicated funds and used exclusively for operations and maintenance of the existing transit system and services. Plaintiffs demand an accounting by a court-appointed independent auditor to determine the extent of C-TRAN’s unauthorized expenditures.”

The suit asks the court to require C-TRAN to gain voter approval of a BRT financing and implementation plan before expending further sales and use tax revenues on the project.

The suit also asks the court to affirm that C-TRAN’s tax revenues were approved for preserving the existing transit system, not for construction of high capacity transit projects.

“I agree with the suit and will stand with Clark County citizens to uphold the law,” said Clark County commissioner David Madore who sits on the C-TRAN board.

The 6-mile Fourth Plain BRT project would connect downtown Vancouver with Vancouver Mall, using McLoughlin Blvd., Fort Vancouver Way and Fourth Plain Blvd. The project would include 20 stations with raised platforms which would be level with low-entry buses. Buses would operate in an exclusive at-grade right-of-way for 1.7 miles and in mixed traffic for the remainder of the system.

C-TRAN officials have calculated the annual operating cost of the $53.4 million project at $3.2 million, a lower operating cost than the present bus system.

Federal and state funding is projected to pay for 85.6 percent of the construction costs.

The C-TRAN board voted 6-3 on July 8, 2014, to allocate $6.7 million as the agency’s share for the Fourth Plain BRT project, providing authority to complete the federal grant agreement. Clark County commissioners David Madore and Tom Mielke, along with Washougal city council member Connie Jo Freeman, voted against the proposal.

Sales and use tax revenues represent about 75 percent of C-TRAN’s annual budget.

C-TRAN officials could not be reached for comment on the pending lawsuit in time to meet publication deadlines.

The plaintiffs, who include many Republican political activists, ask that the Clark County Superior Court bar the agency from spending sales and use tax revenues on the planning or funding of the project.

The $53 million bus rapid transit line, scheduled to open as early 2016, would extend between the Westfield Vancouver mall and downtown, primarily along the city’s Fourth Plain corridor. The enhanced bus system employs larger vehicles, specialized traffic signals, raised boarding platforms and other features. Construction is slated to begin next year.

While a federal grant will finance most of the project, the C-Tran Board of Directors also authorized about $6.7 million in local funding for the project in July.

C-Tran has said the new system on the Fourth Plain Corridor will eventually result in a net savings to the agency’s bottom line.

The court complaint claims that the BRT is not part of high-capacity transit as defined by the High Capacity Transit Act and is inconsistent with C-Tran’s comprehensive plan and 20-year transit development plan.

Other notables include Engleman, a member of Vancouver Vitality — a political committee formed to support conservative candidates on city council — and Hann, a member of the local Tea Party.

C-Tran spokesman Jim Quintana said agency officials have not had time to review the complaint and would not have a response until next week. Damien Hall and Jacob Zahniser of Portland’s Ball Janik law firm, attorneys representing the plaintiffs, could not be reached Friday for comment.